Pre-production is a fairly loose term which refers to the tasks undertaken before production begins.

-Prop and wardrobe identification and preparation

-script read-through with cast, director and other interested parties

-visit all locations ahead of time

-have a call sheet

Post-production is the third and final major phase of the production process. It is often referred to simply as post.

-get a campaign image

-communicate with financier(s) and distributor(s)

-have a good creative vision

-be good at negotiating

-understand the creative processes of filmmaking

-be able to secure finance for the production budget

-ensure compliance with regulations and codes of practice

-understand the relevant health and safety laws and procedures 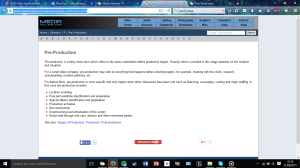 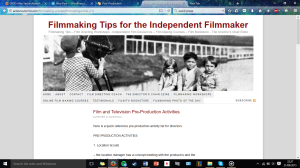 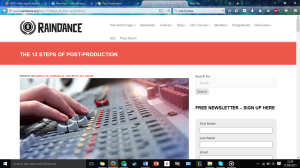 There are many differences between pre and post production such as pre-production is for finding locations to film in, hiring actors and crew, story boarding, whereas post-production is for editing the video footage, mixing the sound, adding sfx if needed.

There are many similarities between pre and post production such as the constant involvement of people such as producers, directors, scriptwriters and making sure of the compliance with regulation and codes of practice.

If the pre-production if bad then some of the impacts this could have is casting the wrong actors, bad script, wrong locations.

If post-production is bad then some of the impacts this could have is badly edited video footage, poorly mixed sound, not enough advertisement, not finished on time.

I didn’t have a PowerPoint for my presentation so this is just my script.

The two job roles I am focused on are: director and director of photography. Some of the tasks a director is tasked with include: interpreting the script and developing storyboards, being the driving creative force in a films production, supervising the editing to produce the final cut and they also manage the technical aspects of filming including: the camera, sound, lighting, design and special effects department. some skills a director needs are: work intensively for long hours, pay attention to detail, creativity and imagination, good communication, people skills and calmness under pressure. Two of my favorite directors are: Stanley Kubrick ( who is responsible for movies such as: Clockwork Orange and Full metal jacket) and Steven Spielberg (who is responsible for movies such as: Jurassic park and Aliens)

Some of the tasks a director of photography has are: creating the visual identity or look of the film, working with the director, camera crew and lighting department to achieve this, managing all aspects of filming from ordering and overseeing equipment and reviewing footage. Some skills a director of photography needs are: have good technical knowledge of photo chemical and digital processes, know about camera equipment, have in depth knowledge of lighting techniques and how to achieve them and have considerable industry experience. One of my favorite directors of photography is: Andrew Dunn who was responsible for the cinematography of Perks of being a Wallflower.

Pre-Production is a fairly loose term which refers to the tasks undertaken before production. Some pre-production tasks are: location scouting, creating a production schedule, story boarding, script writing and determining equipment needs.

Post-production is the third and final major phase of the production process. Some post-production tasks are; editing video footage, editing the soundtrack, adding sound effects, music, adding titles and graphics and get a campaign image.

Some pre and post-production skills that are needed include having a good creative vision, good communication skills, be able to work under pressure, understand the creative processes of film making and ensure the compliance with regulations and codes of practice.

If the pre-production is bad then some of the impacts this could have is: bad acting, wrong location choice and bad scripting. An example of this is Batman and Robin with the bad scripting and casting of Arnold Schwarzenegger and George Clooney.

If the post-production is bad then some of the impacts this could have is terrible SFX, bad soundtrack, poor editing and lack of advertising campaign. An example of this is if orphan Black had bad special effects then the shots when they have one actress playing multiple characters would look bad and cheap.